An engineering team wanted to design a new robotic arm, to be used with different manipulators. The team had a limited time frame of a month to achieve their results and limited engineering bandwidth pushing them towards the use of Parallel Pipes’ AI driven Product Optimization Platform.

The team needed to increase the overall lifespan and reduce maintaince on the robot. Specifically, they decided the best way to start was to improve the durability and endurance, and reduce the weight of specific parts. The geometry and materials for the robotic arm were allowed to change for several parts.

In just under 4 weeks, with the use of Parallel Pipes the engineering team was able to improve their CAD model to meet their specifications. Using Parallel Pipes’ AI based generative design with primitives (GD-P), a process that yields an optimized design which is CNC manufacturable, the engineering team received periodic updates of changes made to the model via AI until it reached their optimization goals. Primitives refers to the initial geometric structures used by the AI which allows the end results to be manufactured via traditional CNC machining.

Traditional CAE tools for robotics are often very complex and difficult to use, taking a large amount of training and weeks to even set up the simulation and analysis correctly. Years of experience in both robotics and software tools are required in order to use them effectively, not to mention cost. AI and machine learning are useful in design optimization for exploring better solutions in a limited time. With Parallel Pipes’ design-to-manufacture approach, an ability to optimize over robotics parts and using several pre-built components such as motors and controllers, the team decided to use Parallel Pipes, aiming to save time and production cost by delegating the project to Parallel Pipes’ AI’s GD-P.

The customer wanted to increase the lifespan and endurance of the robot, improve corrosion resistance, with cost reduction as a tertiary objective. The initial model is shown in figure 1: 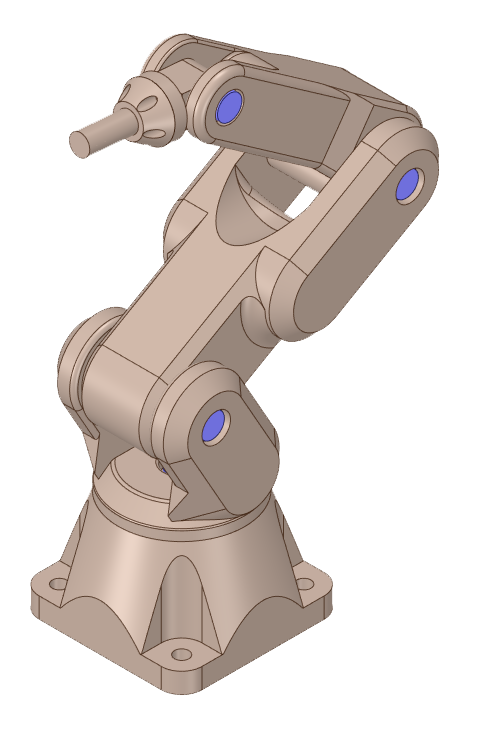 The customer planned to use the robot arm for package sorting, with several different interchangeable manipulators. In this role it would endure a range of different forces, stemming from motion while grasping packages anywhere from 0.1 kg to 5 kg.

Initially, only modifications to geometry which do NOT require additive manufacturing were allowed! Parallel Pipes’ method of GD-P was used to accomplish this. Later, the customer wanted to compare results to those obtained with traditional generative design.

Material changes were allowed for all parts, ranging from steel alloys, aluminum alloys, and several powder coatings. The robot arm was allowed to move, rotating from the base cylinder (±180°), and all three hinge joints (±120°). Stress came from both motion and carrying loads ranging from 0.1 kg to 5 kg. Corrosion from oxidation was also added to the optimization job.

In addition to the physical and environmental definitions, cost and manufacturability were added as lower-priority optimizations for Parallel Pipes to take into account when running its’ AI. Cost estimates to manufacture parts and components, or source pre-built components such as motors and controllers based on customer location were taken into account. Practically, this meant that less expensive parts would be favored as long as they did not interfere with higher priority goals.

Given the design goals and initial model, the optimization job was submitted through Parallel Pipes’ web application. The primary goals were to reduce fatigue and overall stress on the robot, through geometry manipulation and material changes.

The initial design was bulky and sturdy, capable of handling movement with loads up to 5kg reasonably well. However specific parts were susceptible to cracks from longer term fatigue in several places, as shown by the red and yellow areas in figure 2: 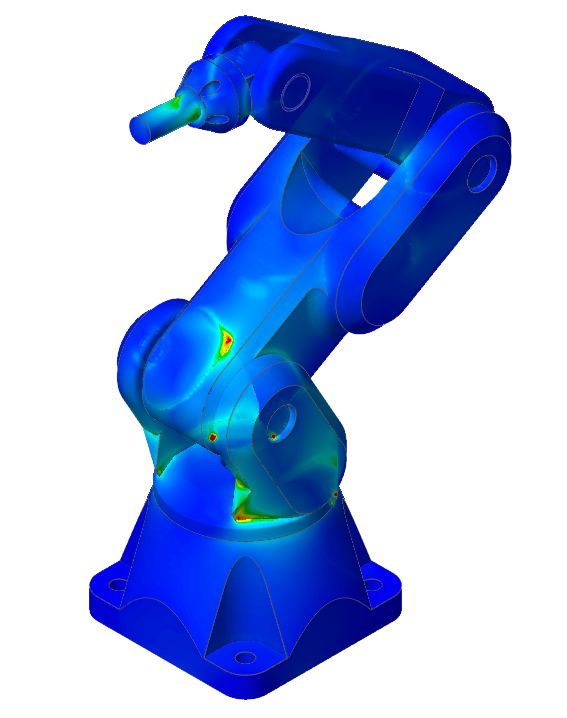 Since only GD-P was allowed, the model geometry modifications were constrained to work in ways that could be machined by traditional manufacturing methods. No topology optimization was was allowed. However, the model had some volume added in a few places, such as increasing the thickness of the arm walls to try and strengthen areas susceptible to prolonged stress, for dealing with heavier loads. Other mass was removed in an effort to at least reduce the stress from its own weight. And material changes across all parts were made in an effort to reduce mass and improve resilience to stress.

After the first major design branch, the stress and fatigue were reduced significantly, as shown in figure 3: 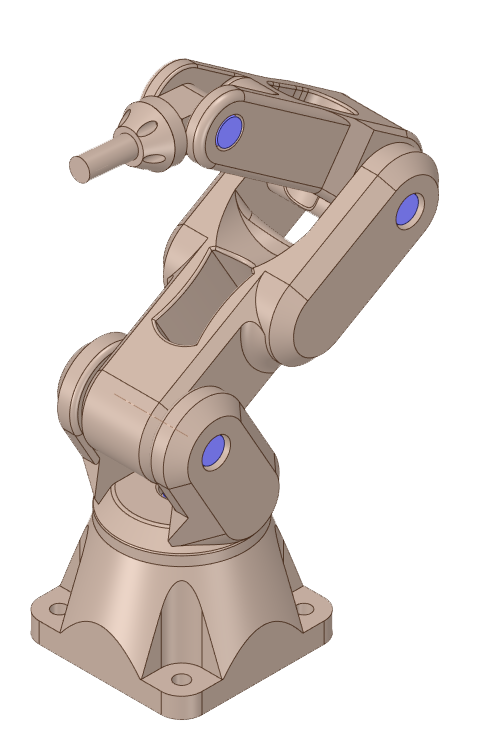 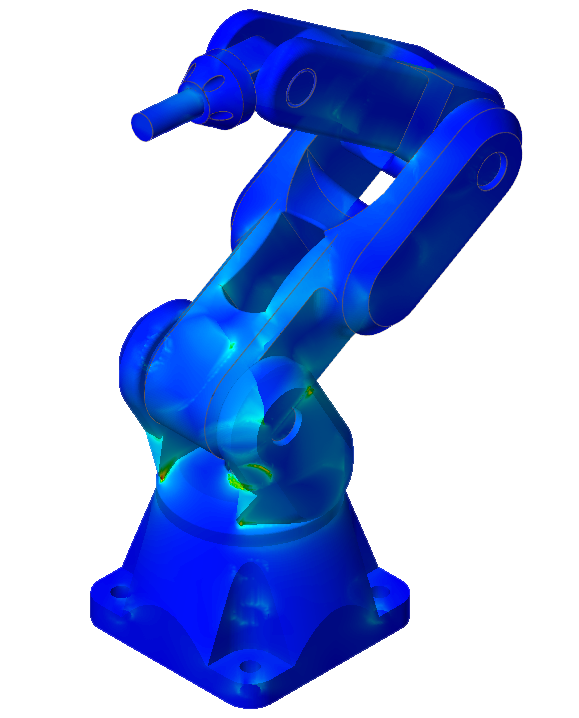 Additional designs along this branch feature perforated sections and generally slimmer exterior, as well as different material combinations for parts. At this point in the project the customer took the initial results and started another optimization job, this time allowing traditional generative design (with topology optimization). This yielded even better results, as shown in figure 4: 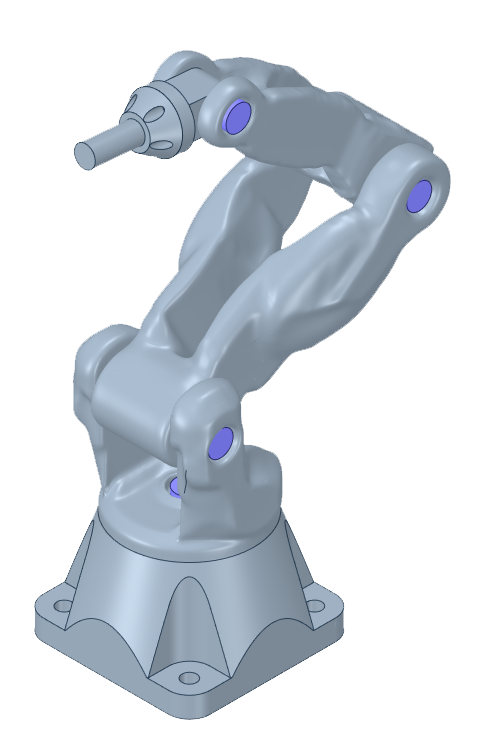 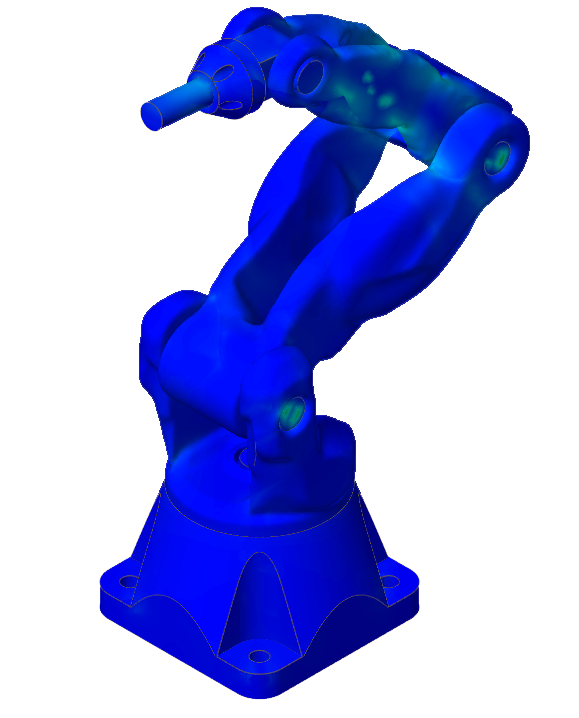 Unfortunately, the resulting model was more expensive to manufacture in larger quantities because they required additive manufacturing. The engineering team took both results, and for despite their superior performance in several aspects, decided to use the GD-P model. Both results showed significant improvement from the original model, as shown in figure 5: 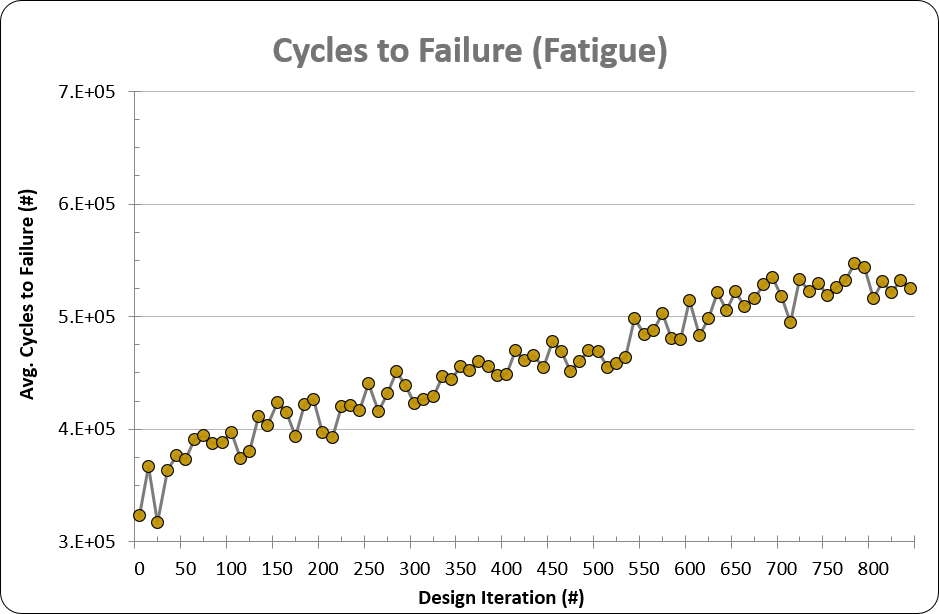 Figure 5: Cycles to failure, based on probability of cracks and fractures from fatigue analysis.

Corrosion was less important to the customer for this study and optimization job, but many of the material changes and a few geometry changes made were influenced by the goal of improving resilience to corrosion. Over a lengthy period of exposure, corrosion built up over the model surface. Specific areas seemed more susceptible, as seen in figure 6: 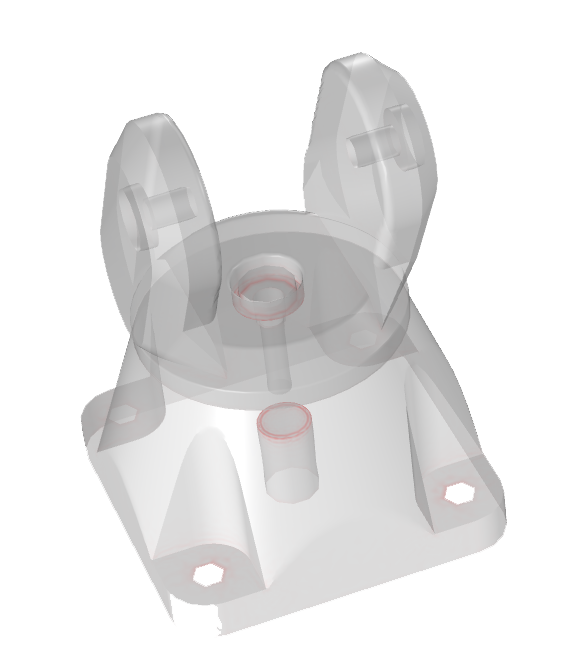 Figure 6: Corrosion buildup over time around arm attachment, base, bolts and pins

Model changes made resulting specifically for the purpose of corrosion resistance are harder to narrow down. Using aluminum for some parts, or choosing a powder coating for other parts are easier to spot. The cumulative results are shown in figure 7: 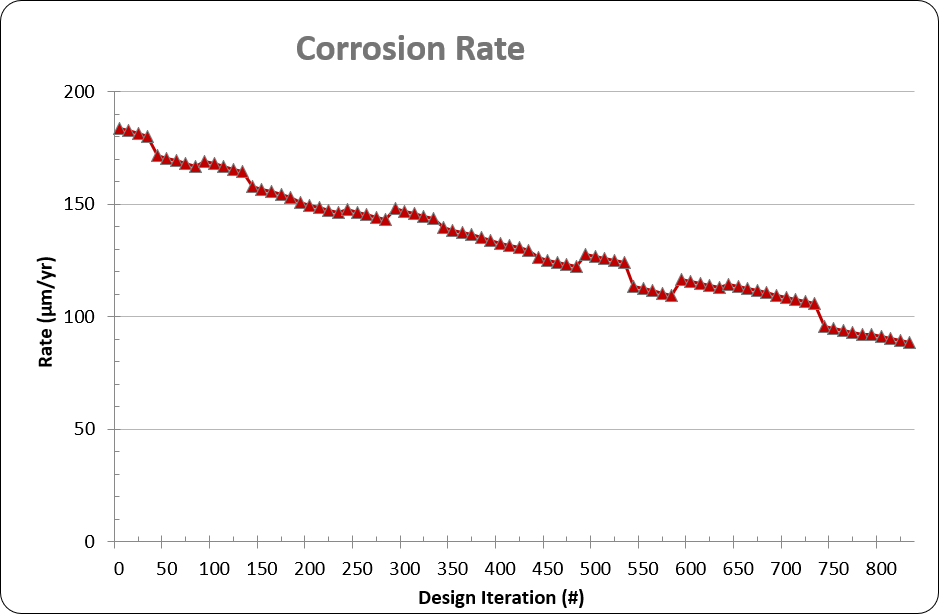 Figure 7: Growth rate of corrosion, at given design iteration.

Using Parallel Pipes, the customer’s engineering team reduced the corrosion rate by nearly 35% for the model with GD-P, and by more than 50% with generative design (traditional).

Over 3-4 weeks, Parallel Pipes was able to improve the initial model significantly. During the first several major design iterations ,GD-P yielded an optimized design that could be manufactured with traditional CNC machining. This took about two weeks.

To see if additive manufacturing would yield better results, standard generative design was used to generate several additional design branches. It further increased the lifespan by reducing stress/fatigue even farther, as seen in figure 8: 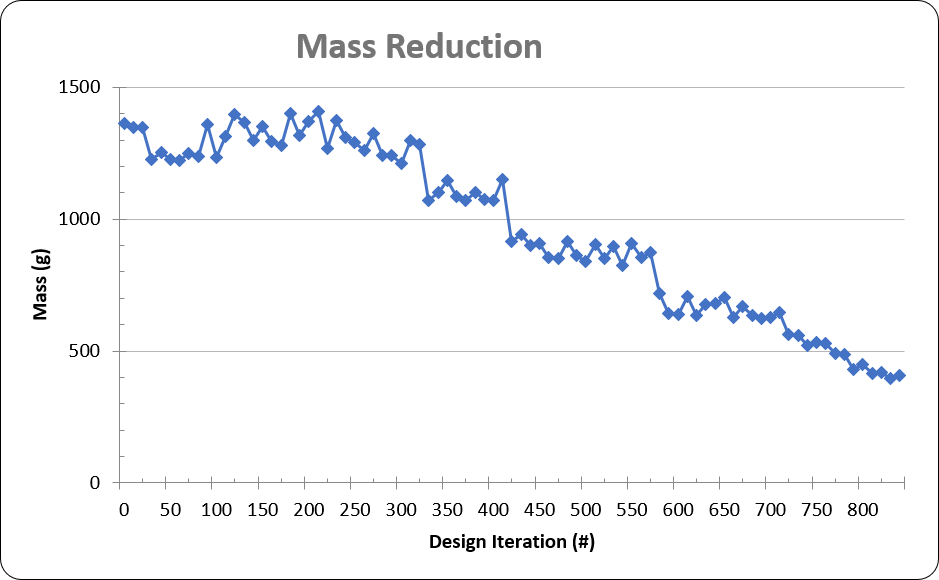 Figure 8: Mass of design, at given design iteration.

However the customer didn’t want to make changes that would require 3D printing, because of the increase in cost to manufacture in bulk, as demonstrated in figure 9: 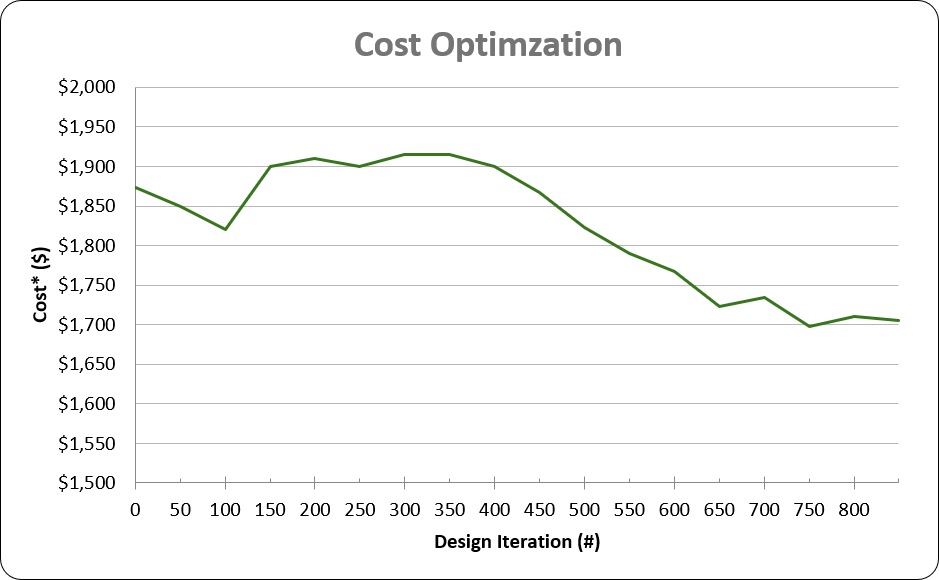 Figure 9: Approximate cost to build design (given customer location and manufacturing method), at given design iteration.

Despite its lower priority in the design goals for this optimization job, manufacturing-cost-per-unit dropped by over 10%. This comes from comparing the cost to build and source parts and components to produce 10,000 units of the initial design, to 10,000 units of the optimized design. The cost savings increase even further when scaling to produce larger quantities of units, in the range of hundreds of thousands or millions.

As a result of the simulation and optimization with the AI-GDP to the prototype, the final design was used by the company to carry out the tests prior to the manufacturing and subsequent launch of the product to the market. This allowed them to clean-up any additional issues by using Parallel Pipes, and thus present a higher quality product to their potential customers.

The end-result of Parallel Pipes whas that the engineering team saved time and money on optimizing their product while receiving a CAD model that was structurally more stable and cheaper to produce than their initial design resulting in an overall success of their project.